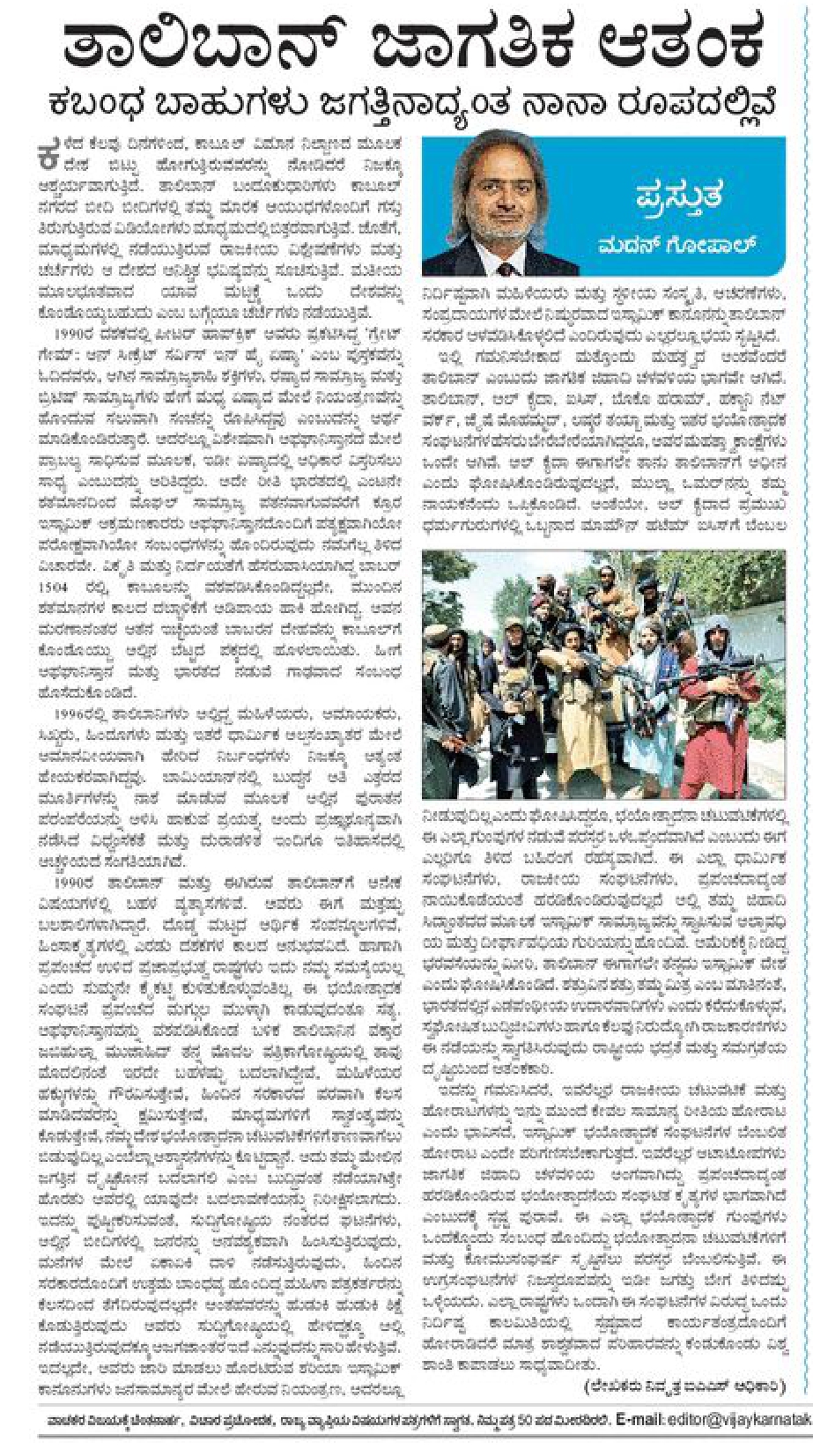 Afghanistan is back in the news, neither for their internationally renowned cricket team nor emerging football team, but for all wrong reasons. The quick and smooth capture of power by Taliban, like winning an uncontested or prefixed match, stunned the citizens of the world. United States America, under the illusion of being a super power reportedly invested from 2002 to June 2021, a staggering $144.98 billion for so called reconstruction and related activities including $88.61 billion for security, $36.29 billion for governance and development, $4.18 billion for humanitarian aid and 15.91 billion for agency operations. About 80% of Afghan budget was paid by United States and it may be recalled that Afghan President Ashraf Ghani publicly stated earlier that his government is unable to support salaries and maintenance of its army even for six months without financial aid from America. Though the analysts say that nearly 80% of funds provided went back to US economy, obviously leaving little for sustained improvements and genuine empowerment of Afghan people, the fact remains that American leadership failed miserably in assessing the mischievous potential of Taliban and inherent weaknesses in the Afghan army that US supposed to have trained and equipped for two decades.

For the past few days, we were shocked to see images of fleeing people from Kabul airport, thousands running helter-skelter leaving their homes and possessions, jostling among themselves to leave their country out of sheer fear, Taliban gunmen roaming on the streets of Kabul flashing their deadly weaponry and uncertain future staring at everyone. Media debates, leaked videos of acts of barbarism from streets of Kabul and many cities, fault finding political debates, stories on the historical legacy of Afghan resistance, hasty interpretations on what a religion stands for, the flood gates of information and news opened all of a sudden.

Those who read the book “Great Game: On Secret Service in High Asia” written by Peter Hopkrik published way back in 1990s understand how two, the then imperial powers, Russian Empire and British Empire, schemed, conspired and fought for control over Central Asia, especially to dominate Afghanistan, a strategic location to expand and hold power over entire Asia unhindered. Similarly, we in India, are fully aware that the brutal Islamic invaders from eighth century to fall of Mughal Empire had roots in Afghanistan, directly or indirectly. It was in 1504, the Babur, known for his perversity and ruthlessness, captured Kabul and could succeed in his barbaric ambitions through series of attacks laying the foundation for centuries of oppression and subjugation. On his desire on deathbed, Babur’s body was taken to Kabul to be buried on a hill-side. This is the gory connection of Afghanistan with India.

Origins of Taliban in 1980s as co-product of Pakistan Intelligence Agency ISI and US Intelligence Agency CIA to fight Soviet forces, Taliban’s capture of Kabul in 1996, heinous crimes against women, innocents, inhuman restrictions imposed on Sikhs, Hindus and other religious minorities, shocking destruction of tallest sandstone carvings of Buddhas at Bamiyan, senseless vandalism to erase ancient heritage, untold misery and misgovernance are well known facts of recent history. The bonhomie of Taliban and US government ended abruptly in 2001 after most disturbing terrorist attack on towers of World Trade Center orchestrated by Osama bin Laden, leader of al Qaeda from a secret location inside Taliban controlled Afghanistan. Now, after almost two decades the developments in Afghanistan turned a full circle and hunter became the hunted.

The Taliban of 1990s and as of now undergone phenomenal change on many counts. The terrorist splinter group is a major force with huge financial resources, decades of experience in violent insurgency. The democratic nations of the world can no longer ignore this menace and pretend as if it’s no one’s problem.

Initial assurances by Zabihullah Mujahid, the spokesman of Taliban in the first press meet that they will respect women’s rights, forgive those who worked for previous government, freedom of media, that they will not allow the country to become haven for terrorists to attack other countries and other tall promises are nothing but a clever ploy to project a moderate image and also to gain crucial time to strengthen their hold. The incidents subsequent to press conference such as beatings on the streets, raids on the houses of those were aligned with previous government, turning away of women journalists from work and a visible gap in assurances and action confirmed the worst fears and the skepticism among Afghan people appears to be fully justified.

Further, it’s also unclear what type of Sharia, the Islamic Law, that govern life of citizens in general and women in particular likely to be adopted by Taliban government as interpretation of Islamic Law practiced differently in different countries according to local culture, practices, traditions and customs. There is also a specific school of jurisprudence that firmly believe that the basic characteristics of medieval Sharia is not only outdated but incompatible with modern legal systems that believe in equity, justice, secularism free from imprecisely and ambiguously defined language in the sacred texts.

Another significant point to be noted is that present Taliban is part and parcel of global jihadist movement and so called differences amongst Taliban, al Qaeda, ISIS, Boko Haram, Haqqani network, Jaish-e-Mohammed, Lashkar-e-Taiba and other terrorist groups are only for name sake and they share common diabolical ambitions.

It is noteworthy that Al Qaeda once declared that they are subordinate to Taliban and accepted Mullah Omar as their leader. Similarly, Mamoun Hatem, one of the prominent clerics of Al Qaeda declared unflinching support to ISIS. The vicious circle of mutual bonding and interlinked terrorist plans among all these groups is an open secret.  Added to this, many organizations, political outfits, overt and covert formulations scattered around the globe, sing a common tune typical of a jihadist ideology and share a short-term and long- term goal of establishing Islamic emirate to begin with and ultimate realization of worldwide Caliphate over larger territory as much as possible. It’s no wonder, the Taliban has already declared itself an Islamic Emirate betraying promises extended to US government not to do so. Expectedly, in India, so called left liberals, self-styled historians known for their anti-national bias, urban naxals disguised as academicians, frustrated intellectuals out of favour with the system, some prejudiced media houses and a ragtag combination of unemployed politicians are unabashedly welcoming the return of Taliban sensing a golden opportunity to further their short-sighted ambitions at the cost of sacrificing security, integrity and national pride.

Political activism and unbridled militancy are no longer considered as un-Islamic. Global jihadist movement is a multi-headed monster and no more hides its nefarious ambitions. The coordinated and concerted acts of terrorism as a means to an end spread across the length and breadth of the world is a clear proof that the secretive period of incubation is over. All these terrorist groups are inherently and amorphously connected with one another and there is perfect coordination and support across a spectrum of activities.

Sooner the world awakes to this harsh reality, better for very survival of nations in order to protect the people who firmly believe in civilizational values. Clear strategy, concrete action in specific time frame can only save everlasting human dignity and ensure world peace.

Among the many challenges that we face today, the most important one is, identifying the truth.

With so many falsehoods, Half Truths and Post Truths floating around largely irresponsible social media platforms, it is not an easy job to ascertain the Absolute Truth with certainty.

No amount of conviction and narratives otherwise, can change the Truth. A Democracy like ours thrives on Truth and Transparency!

TrackTheTruth is an attempt to present the Absolute Truth to the Nation.

Home | About | Media | Publications | Get in Touch

© 2021 Design and Powered by Track The Truth