Kabul will be under pressure from four directions: Pakistan, China, Russia, US/EU 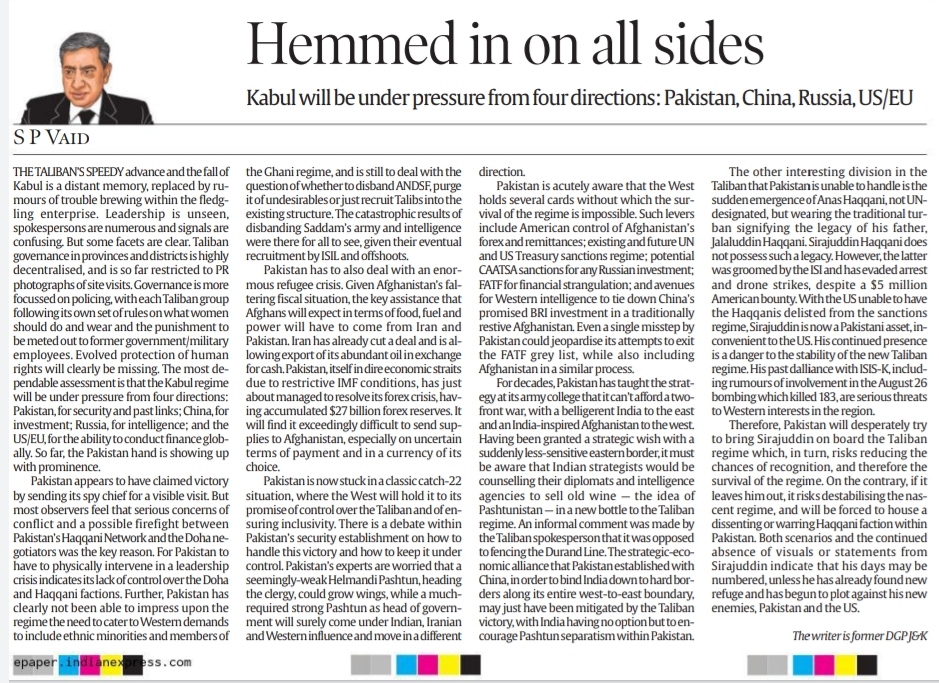 Published by The Indian Express on 07 Sept 2021

The Taliban’s speedy advance and the fall of Kabul is a distant memory, replaced by rumours of trouble brewing within the fledgling enterprise. Leadership is unseen, spokespersons are numerous and signals are confusing. But some facets are clear. Taliban governance in provinces and districts is highly decentralized, and is so far restricted to PR photographs of site visits. Governance is more focused on policing, with each Taliban group following its own set of rules on what women should do and wear and the punishment to be meted out to former government/military employees. Evolved protection of human rights will clearly be missing. The most dependable assessment is that the Kabul regime will be under pressure from four directions: Pakistan, for security and past links; China, for investment; Russia, for intelligence; and the US/EU, for the ability to conduct finance globally. So far, the Pakistan hand is showing up with prominence.

Pakistan appears to have claimed victory by sending its spy chief for a visible visit. But most observers feel that serious concerns of conflict and a possible firefight between Pakistan’s Haqqani Network and the Doha negotiators was the key reason. For Pakistan to have to physically intervene in a leadership crisis indicates its lack of control over the Doha and Haqqani factions. Further, Pakistan has clearly not been able to impress upon the regime the need to cater to Western demands to include ethnic minorities and members of the Ghani regime, and is still to deal with the question of whether to disband ANDSF, purge it of undesirables or just recruit Talibs into the existing structure. The catastrophic results of disbanding Saddam’s army and intelligence were there for all to see, given their eventual recruitment by ISIL and offshoots.

Pakistan has to also deal with an enormous refugee crisis. Given Afghanistan’s faltering fiscal situation, the key assistance that Afghans will expect in terms of food, fuel and power will have to come from Iran and Pakistan. Iran has already cut a deal and is allowing export of its abundant oil in exchange for cash. Pakistan, itself in dire economic straits due to restrictive IMF conditions, has just about managed to resolve its forex crisis, having accumulated $27 billion forex reserves. It will find it exceedingly difficult to send supplies to Afghanistan, especially on uncertain terms of payment and in a currency of its choice.

Pakistan is now stuck in a classic catch-22 situation, where the West will hold it to its promise of control over the Taliban and of ensuring inclusivity. There is a debate within Pakistan’s security establishment on how to handle this victory and how to keep it under control. Pakistan’s experts are worried that a seemingly-weak Helmandi Pashtun, heading the clergy, could grow wings, while a much-required strong Pashtun as head of government will surely come under Indian, Iranian and Western influence and move in a different direction.

Pakistan is acutely aware that the West holds several cards without which the survival of the regime is impossible. Such levers include American control of Afghanistan’s forex and remittances; existing and future UN and US Treasury sanctions regime; potential CAATSA sanctions for any Russian investment; FATF for financial strangulation; and avenues for Western intelligence to tie down China’s promised BRI investment in a traditionally restive Afghanistan. Even a single misstep by Pakistan could jeopardise its attempts to exit the FATF grey list, while also including Afghanistan in a similar process.

For decades, Pakistan has taught the strategy at its army college that it can’t afford a two-front war, with a belligerent India to the east and an India-inspired Afghanistan to the west. Having been granted a strategic wish with a suddenly less-sensitive eastern border, it must be aware that Indian strategists would be counselling their diplomats and intelligence agencies to sell old wine — the idea of Pashtunistan — in a new bottle to the Taliban regime. An informal comment was made by the Taliban spokesperson that it was opposed to fencing the Durand Line. The strategic-economic alliance that Pakistan established with China, in order to bind India down to hard borders along its entire west-to-east boundary, may just have been mitigated by the Taliban victory, with India having no option but to encourage Pashtun separatism within Pakistan.

The other interesting division in the Taliban that Pakistan is unable to handle is the sudden emergence of Anas Haqqani, not UN-designated, but wearing the traditional turban signifying the legacy of his father, Jalaluddin Haqqani. Sirajuddin Haqqani does not possess such a legacy. However, the latter was groomed by the ISI and has evaded arrest and drone strikes, despite a $5 million American bounty. With the US unable to have the Haqqanis delisted from the sanctions regime, Sirajuddin is now a Pakistani asset, inconvenient to the US. His continued presence is a danger to the stability of the new Taliban regime. His past dalliance with ISIS-K, including rumours of involvement in the August 26 bombing which killed 183, are serious threats to Western interests in the region.

Therefore, Pakistan will desperately try to bring Sirajuddin on board the Taliban regime which, in turn, risks reducing the chances of recognition, and therefore the survival of the regime. On the contrary, if it leaves him out, it risks destabilising the nascent regime, and will be forced to house a dissenting or warring Haqqani faction within Pakistan. Both scenarios and the continued absence of visuals or statements from Sirajuddin indicate that his days may be numbered, unless he has already found new refuge and has begun to plot against his new enemies, Pakistan and the US.

Among the many challenges that we face today, the most important one is, identifying the truth.

With so many falsehoods, Half Truths and Post Truths floating around largely irresponsible social media platforms, it is not an easy job to ascertain the Absolute Truth with certainty.

No amount of conviction and narratives otherwise, can change the Truth. A Democracy like ours thrives on Truth and Transparency!

TrackTheTruth is an attempt to present the Absolute Truth to the Nation.

Home | About | Media | Publications | Get in Touch

© 2021 Design and Powered by Track The Truth